Approximately four years ago the Veteran was laid off from Jones Heartz when the company downsized. He worked on his feet every day, challenged by neuropathy while working in shipping, receiving and deliveries. After getting laid off from his job, the Veteran began to experience increased marital problems, primarily due to financial hardship. 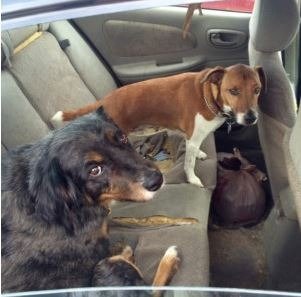 Shortly thereafter the Veteran foreclosed on the home he had lived in comfortably for seven years. Following the foreclosure, the Veteran and his wife split up. The Veteran still had his four-door sedan and two dogs Rocky and Ginger. The following Christmas, he had been living in his sedan with Rocky and Ginger for 10 months. He had run out of money, food, warmth, and hope. He felt overwhelmed and decided anything would be better than sitting in his car freezing.

He proceeded to drink a large amount of antifreeze. His dog Rocky began pulling on his arm, nudging him and whining. The Veteran had almost lost consciousness, but with Rocky’s encouragement, he decided to call 911. He was admitted into the hospital and survived the attempt on his life.

The Veteran said, “If I hadn’t had them, I probably wouldn’t be here. Taking care of my dogs and keeping gas in the car have been my priorities over the past four years.”

The Veteran said his experience of getting approved into the HUD-VASH program, as well as finding housing to accommodate his dogs, really took a lot of pressure off!

When he received the news of approval for housing, tears rolled down his face as he exclaimed, “It just hit me! This is going to be over and I didn’t have any hope left. I’ll finally have a place to live in. ”

The last obstacle to housing was finding the money for the pet deposit. The Veteran was unwilling to move forward without his companions Rocky and Ginger. He said, “I wasn’t sure where the money would come from, but I remained real hopeful.”

A request for assistance was submitted to Veterans Matter. The Veteran waited anxiously for the decision. After a short time, the deposit request was approved. With the deposit approval from Veterans Matter, this Veteran’s last barrier to overcoming homelessness was eradicated.