Moments ago some of the 1Matters team helped last of the 75 veterans move into Commons at Garden Lake. 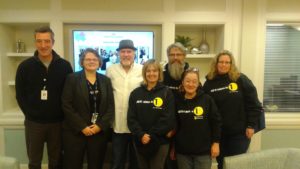 There are so many to thank for Commons at Garden Lake, but two who were there since the beginning, two who’s dogged determination culminated today in 75 of our veterans who were on the streets and in the shelters, are now housed. The two are pictured above. To Shawn Dowling with the VA and Michael Preston with National Church Residences, on behalf of the 75 men and women who wore the uniform who are now housed in the building that surrounds you, we all say thank you! Thank you very much. Thanking you for making this…..