Bid to Meet Carrie Underwood in Cincinnati on Thursday

Carrie’s “The Storyteller Tour – Stories in the Round” stops in Cincinnati next Thursday the 20th of October. She has donated 4 tickets and 4 meet & greets passes for the show that evening at the U.S. Bank Arena.

The tour’s 18 semi-trucks and 8 buses will roll into Cincinnati, continuing its highly-successful 2016 run. Since its launch in January, fans and critics have been raving about Carrie’s stand-out performances coupled with the dramatic in-the-round stage production. 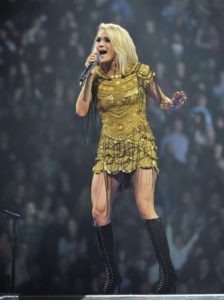 The show “is a no-expense-spared spectacle that highlights her approachable beauty, her roar of a voice and a substantive set of songs that have commanded the charts since her ‘American Idol’ victory a long decade ago,” expressed the Atlanta Journal Constitution. “The in-the-round setup commissioned by Underwood allows for unparalleled vantage points – and even those in the arena’s highest peaks could watch one of four oval video screens situated above each side of the stage.”  And says the Florida Times-Union, “Lasers and swaying spotlights and fireworks and explosions all added to the spectacle. But make no mistake; Underwood was the star of the show.”

Carrie’s donation is part of a Veterans Matter fundraiser on October 19th at the Toledo School of the Arts Porter Gallery. The entitled ‘Images from a Photographic Journey;’ has been designed by Harry Sandler to raise money to house more veterans nationwide.

Harry Sandler, as tour manager for such acts as John Mellencamp, Billy Joel, Van Halen, and most recently the Katy Perry tour, has traveled the world capturing breathtaking vistas from all corners of the globe. Many of these vistas are captured for his show at the gallery.

100% of the proceeds from this auction will go to Veterans Matter to get more veterans and veteran families with children off the streets before the chill of winter hits.