I have been involved with helping those on the streets since 1990. I have had thousands of donors over those years and I have to say: Never have I experienced one with the level of compassion of Jordan Reses Supply Company.

If you heard that a company donated half a million dollars to house veterans, you would expect it to be Pepsi or Mastercard doing it because it fit their national marketing plan. Not a small, unknown Michigan company that has made it their business to help veterans and generously share the fruits of this labor with the veterans who have been most ignored, those on the streets. Why? Because they too figure it is our fair share as regular Americans to help. We take care of our own.

We will use one third of this gift to fund the pilot of our new employment program in Toledo and Detroit.  Tentatively titled our “Training and Re-Employment Program,” we are creating it because we are finding veterans who are now housed wanting to find a way to work and return to self sufficiency, they just need a hand up.  We are extending that hand.  And the compassion of Jordan Reses allows us the luxury to a 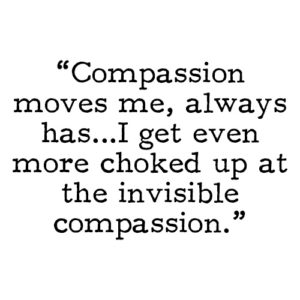 pproach it as “We have the money, so how can we BEST use this money to help as many of our formerly homeless veterans as possible gain employment?”

We will use the rest of the gift to leverage national fundraising around our  Veterans Day “11/11 @ 7  Rallies.” Exchange Clubs nationwide have adopted Veterans Matter’s efforts to house more veterans in their communities, regions, and the nation, with many staging simultaneous events that night, at 7 p.m.

After they told me what they wanted to do I got pretty choked up. Compassion moves me, always has. I get choked up at those videos of people doing nice things to help others. I get even more choked up at the invisible compassion. The men, women and children who will be sleeping in a home rather than a car or on concrete this winter will never know who got them that pillow that lies under their head. But we do. And words are not adequate to convey our gratitude.

Toledo, Ohio – When Cheryl Nilsson retired from the Air Force, and after serving several years as legal counsel for a government contractor, she was moved by a strong desire to give back to veterans and the community.

Now, as a service-disabled veteran small business owner, Cheryl is doing just that through her company, First Nation Group, LLC.  First Nation Group has a principal location in one of the poorest zip codes of Detroit and is certified by the Small Business Administration as a Historically Underutilized Business Zone (HUB Zone).  “The focus is revitalization in a neighborhood that needs hope, opportunity and more jobs. We intend to expand that footprint including a focus on homeless veterans,” said Nilsson.

“The merger process took well over one year to complete with a common theme that kept us steadfast.  The theme was that the merged businesses would be better positioned and more successful, thus providing more opportunity to fulfill our shared philanthropic goals. First Nation’s acquisition of Jordan Reses only strengthens our long-term commitment to veteran causes like Veterans Matter,” said Baugh.

Veterans Matter was started by “Advocate in Chief” Ken Leslie, a formerly homeless man, as a way to house 35 homeless veterans through the VA HUD-VASH program in his hometown of Toledo, Ohio. At the urging of Dusty Hill of ZZ Top and John Mellencamp, Leslie expanded the homeless veteran reintegration program to house veterans in the two singers’ home states. Thanks to over 20 additional celebrities, the program has expanded nationally, having housed more than 1,100 homeless veterans in 12 states.

After First Nation acquired Jordan Reses this year, the two forces of compassion for veterans and their community, now doing business as Jordan Reses Supply Co., expanded their past giving by committing an additional $300,000 over the next two years: $200,000 to house homeless veterans, and $100,000 to provide startup funding for the new Veterans Matter Training and Re-Employment Program. (TREP)

To celebrate Veterans Day and double the value of the housing pledge, the two groups will use it as an incentive match for all money raised on Veterans Day through the “Veterans Matter 11/11 @ 7 Rallies” taking place across the nation. Last year over 50 cities had rallies, most sponsored by local Exchange Clubs.

“This totals more than half a million dollars they have pledged and contributed to help homeless veterans through our program alone. Rather than make money for money’s sake, I think committed companies like First Nation and Jordan Reses make money to give back to those who have served. Tonight there will be veterans and their children with pillows under their heads instead of concrete or cardboard. That is the power of their compassion,” said Leslie.

Veterans Matter is a program of 1Matters.org, a non-profit 501c3 sparked and supported by singer John Mellencamp which creates and funds innovative programs to return the unhoused to financial and domestic autonomy. More information can be found at Veteransmatter.org.