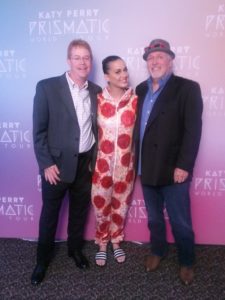 Those who have been with us throughout the years know we are huge on giving credit where credit is due. This is the story of how Harry Sandler inspired Katy Perry, who inspired Scott Vaughn, who has now started Operation Mid-Atlantic with the goal of raising a million dollars to house 1200 homeless veterans.

Harry Sandler has been a pal of 1Matters for about 5 years. We met him when we recorded the 1Matters and World Homelessness Day videos with John Mellencamp. John had talked Harry out of his 3rd or 4th retirement to again manage his tour, which he had done for four decades.

In addition to being the tour manager for every big name you can think of, Harry also happens to be a brilliant, I believe genius level, photographer. On his travels to places we will never visit, he catches these incredible landscapes, which magically create an emotional response to the images.

As he was retiring after that tour he offered to have a gallery showing of his work in Toledo, with proceeds benefiting 1Matters. The events were huge successes, but more importantly a strong friendship was forged between Harry and all of the 1Matters team.

Our third annual Toledo exhibit was cancelled when he was again called out of retirement to be Katy Perry’s tour manager for the Prismatic World Tour.

Even though Katy is not doing ticketed public meet and greets on this tour, through the power of Harry and Katy’s compassion for our veterans, Harry was able to get a meet and greet for Veterans Matter to auction. The winner would be the superstar’s VIP guest, able to enjoy her show and to also meet with her backstage.

The winner was Scott Vaughn, a partner at Ernst and Young, in the DC area. He was a fan of Katy’s, and an even bigger fan of our veterans. He had an incredible day in Cleveland on August 14th, and he and I went to the pre-show VIP party, wandered around backstage, enjoyed exceptional seats, and of course, were enthused with meeting Katy herself.

The meeting was in a room adjacent to the stage. She bounded in dressed in a pepperoni “onesie” with her hair in a tight bun, ready to hit wardrobe for the finishing touches before she hit the stage. She spent about twenty minutes there, and during her time with us she was kind, engaging, and funny.

It happened that, on the day before, August 13th, we received a call from the VA in Austin, Texas; they requested deposits for 17 unhoused veterans for a special site project. Katy and Scott’s donation went to cover those 17 veterans, and five more in Michigan.

When we told her 22 veterans had been housed because she cared, she was grateful to Scott. “Thank you so much for helping Veterans Matter, it is so important that we help those who fought for our freedom,” she told him.

As we walked back to our seats after the meeting, Scott said he wanted to start a Mid-Atlantic chapter of Veterans Matter and help as many veterans as he could. Coincidently, I had been booked to give the keynote address at the Project Management Institute dinner in Washington, DC the following Tuesday, so we decided to meet for breakfast the morning after the speech. But for tonight, we enjoyed the show.

If you have never been to a Katy Perry show, you have to go some time. It is one of the most advanced technological extravaganzas ever staged. Yet, despite the mammoth size of the show, the magic of Katy Perry was clearly evident. She is able to do what few performers have done in a show of that size – perform it as if it were personally TO each and every one of the 20,000 or so fans in attendance, 1 at a time.

Between songs she would have these soft moments just between her and you, the audience, and talk about some things you might be struggling with. Each solution seemed to point to the same thing: Be yourself, love all, and fly.

The following Tuesday I flew down to give my talk to PMI in DC. Even before I took the stage I liked this group. You know how on any kind of “go help someone days” companies go rake leaves to help people? Not these guys; they want to have a permanent impact. What they are going to do is pick 200 non-profits and then project managers of PMI will help the non-profit execute a project that the non-profit actually needs. How cool is that?! I want to work with them to help expand to other communities where they have chapters.

At the end of my talk I told the 300 people there about the cool string of events above and how we were starting the Operation Mid-Atlantic chapter of Veterans Matter. I invited anyone interested in helping to join us for breakfast in the hotel at 6:30 the next morning. Five came and three emailed their regrets but committed to participate.

Operation Mid-Atlantic set a one million dollar goal; enough to help at least 1200 veterans in the region get housed. I think they will do it. They have these incredible project managers at PMI, led by a man who was inspired to start the chapter because of the momentum created by the compassion of Harry Sandler and Katy Perry to just matter to our American heroes on the streets. Veterans Matter: We take care of our own.