This is BIG NEWS – with more to come on Monday!

Before his 2007 concert in Toledo, Rock and Roll Hall of Fame singer John Mellencamp made a chance visit to the Tent City – Project Connect event downtown and was impressed with how “the community comes together to give compassion to those who need compassion.” He was impressed enough that he invited all of the Tent City guests to his show that night; 60 went.

One returned after the show and said to Tent City founder Ken Leslie, “Ken, John talked to us from the stage. I guess I really do matter.” From this, 1Matters was born.

What had been a local project grew to become a regional 501(c)3 non-profit, which Mellencamp has continued to support. 1Matters.org now creates and funds new programs that return people to financial and domestic autonomy, including street papers in three cities, a program addressing rural homelessness, and most recently a national program, Veterans Matter, which has already housed over 1,100 veterans in 12 states.

This fall, before his concert at the Stranahan on Oct. 21, Mellencamp will return to Tent City, this time as the Honorary Mayor and Grand Marshal to kick off Tent City and the Veterans Matter Walk to End Veteran Homelessness.

“John has made it a lifelong mission to use his celebrity not just to draw attention, but to provide his time, capacity and resources to countless organizations which care for others, such as Farm Aid. The goal here in Toledo is to bring the national spotlight to Toledo’s compassion and our urgent mission to house 2,000 more veterans nationwide this year,” Leslie said. 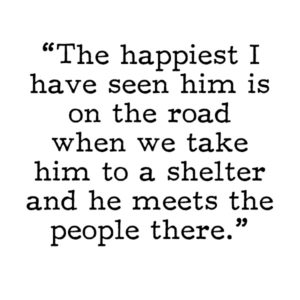 “In part because of John’s long-term engagement with us, Jordan Reses Supply Co. out of Ann Arbor just made a national commitment of $300,000 for housing veterans and funding the start-up of our new employment program to hire the vets after they are housed.”

Prior to the public events in Toledo, Mellencamp will meet privately with some of the people housed by the organization’s programs.

“John probably does as much quiet support as he does public support,” Leslie said. “Yes, he does PSAs and raises funds for us, but the happiest I have seen him is on the road when we take him to a shelter and he meets the people there. In one shelter cafeteria with over 50 people, alone without staff, John went table to table extending his hand and greeting every single person with, ‘Hi, I’m John, what is your name?’ Everyone was really moved by that.”

To help the group raise additional funds, Mellencamp will also invite the highest Veterans Matter Walk fundraiser and a guest to his show that evening with a meet-and-greet immediately following. The singer is donating an additional ticket package to support the Oct. 19 fundraiser hosted by his long-time tour manager and 1Matters board member Harry Sandler. Sandler will be presenting an October-long show of his photography, “Images of a Photographic Journey,” at the Toledo School for the Arts Porter Gallery.

Started in 1990 by Ken Leslie, formerly homeless himself, Toledo’s Tent City – Project Connect has focused the region’s compassion on restoring the unhoused to financial and domestic autonomy. In addition to housing and employment, the weekend-long Tent City delivers a complete medical center, critical documents including IDs and birth certificates, dental services, clothing, haircuts, food and entertainment.

Veterans Matter was started to house 35 local veterans as the result of one of the “blitzes” Leslie conducts with the VA’s homeless outreach teams. Leslie created Veterans Matter to provide deposits directly to landlords to eliminate the last barrier preventing homeless veterans from crossing the threshold into VA-supported, long-term voucher-assisted housing. This partnership gives Veterans Matter a 100 percent success rate housing veterans in the VA’s long-term housing program that has a 91 percent success rate keeping them housed.