These three Case Studies demonstrate how we integrate with the local communities, foundations, and local veterans groups to house their local veterans. 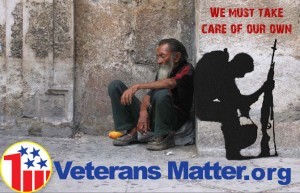 Started in February 2012 the pilot program initially focused in Lucas County. Due to immediate success housing veterans, the program was expanded to Northwest Ohio within 30 days. 60 days later the program was replicated out of the Ann Arbor VA Medical Center to cover the rural communities of southeast Michigan.

Veterans Matter was conceived when founder Ken Leslie learned from the local Healthcare for Homeless Veterans coordinator Shawn Dowling the only thing preventing 35 plus local veterans from getting housed were the security deposits.

That night Ken designed the Veterans Matter pilot and the next day called Barb Petee, the head of the Toledo Community Foundation’s Promedica Advocacy Fund. He not only asked Barb to fully fund the pilot at $26,250, he also asked the foundation to do the impossible for a foundation: waive the normal three month due diligence process and move at black ops speed because there were families waiting today.

The pilot program initially focused in Lucas County. Due to immediate success housing veterans, the program was quickly expanded to Northwest Ohio, and then was replicated out of the Ann Arbor VA Medical Center to cover the rural communities of southeast Michigan.

This expansion was possible because the Lucas County Veterans Services Commission stepped in to add to the fund to house Lucas County veterans which freed up the Promedica funding for the desperate rural areas.

After demonstrated success in Ohio and Michigan, Dusty Hill of ZZ Top got wind of Veterans Matter through a conversation with Bob Merlis, an LA based music industry publicist and 1Matters board member. After visiting with Ken and several veterans housed by the program in Toledo, Dusty pledged to convene a chapter in Houston to house the Houston Veterans. Kevin Maley was recruited to join Dusty and in less than ten phone calls, this local team raised over $50,000 to match the 75 allocated Houston vouchers. The same day funding was secured two Houston veterans were approved for Housing.

Funding Partners: Give Us Your Poor, New England Center for Homeless Veterans, the Adam Ezra Group, and the American Music Project: Voices for Veterans. (Goal: $30,000)

Operation New England was started when John McGah with Give Us Your Poor learned of VM through Dr. Josh Baumberger with the US Interagency Council on Homelessness. John has connected VM to both the New England fundraising and the national “American Music Project: Voices for Veterans” concert series.