YOU can win two tickets to see George Thorogood, win one of his guitars, and meet him backstage to get it autographed at his Toledo Rock Party show at ProMedica Park on 6/29.

For a five dollar donation to Veterans Matter, you have the opportunity to win this exclusive George Thorogood Rock Party experience.

Every 5 dollars donated before noon on June 27th is another chance to win.

Toledo Harley-Davidson, a longtime supporter of Veterans Matter will be hosting a George Thorogood themed party/fundraiser at their store, 7960 W. Central Ave, on Wednesday June 27th from 6 p.m. to 8 p.m., where the raffle winner will be drawn at 8 p.m.

Veterans Matter was started in Toledo, Ohio to house 35 local veterans. With the support of George Thorogood, Kid Rock, John Mellencamp, Dusty Hill, Mitch Albom and a cadre of musicians and celebrities, Veterans Matter has grown and has helped house over 2,100 veterans in 18 states to date.

“The fact that Promedica Health System was the founding funder of Veterans Matter, makes having George’s show at Promedica Park something special to us.” said Veterans Matter founder Ken Leslie. “George has always been there for the veterans and just like Toledo Harley, they stand up for the homeless veterans forgotten on the streets of this nation. We take care of our own.”

Enter now, and then help us get the word out and share this with your friends on all your social media. Thank you so much. 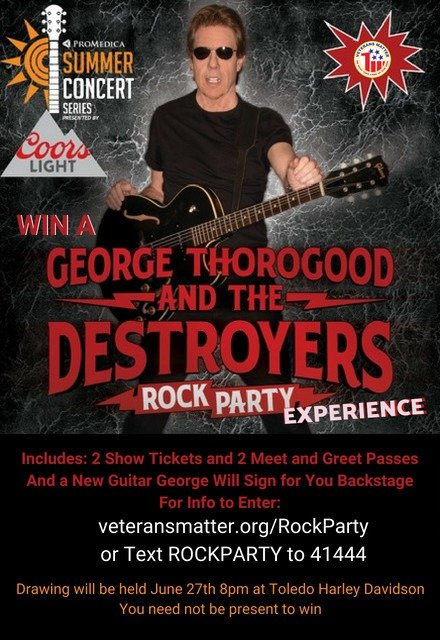