First, Mr. Mellencamp, on behalf of the thousands of people who have found housing and employment because of you, we say ‘Thank you, John!”

Before his 2007 concert in Toledo, John Mellencamp made a chance visit to our Tent City – Project Connect event downtown. What was supposed to be a ten minute in-and-out turned into a one hour visit.

I have no idea what sparked the connection, what made John care so much.

My hunch is it was when he and his son Hud met privately with several of the people helped by Tent City. It was cool to see how Hud hung at the perimeter in the beginning, but by the end had moved himself up to hear the stories exchanged between our guests and his dad as they all opened up to each other.

As he was moving to the stage, after his private conversations, he told the media he was impressed with how the community came together to show compassion for those who need compassion.

He was impressed enough that he invited all of the Tent City guests to his show that night; 60 went. 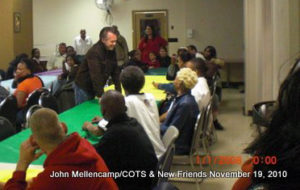 John chatting up the guests he met at the COTS shelter in Detroit.

One came back and told me “Ken, John talked to us from the stage. I guess I really do matter.” From this moment, 1Matters was born.

What had been a local project grew to become a regional 501(c) 3 non-profit, which John has continued to support. 1Matters.org now creates and funds new programs that return people to financial and domestic autonomy, including street papers in Ann Arbor, Detroit and Toledo, a program addressing rural homelessness, and most recently a national program, Veterans Matter, which has already housed over 1,200 veterans in 165 cities nationwide.

This growth has been driven by John’s continued support and engagement. Good things keep happening.

Note: Fresh off a two year stint as Katy Perry’s tour manager, Harry is presenting his third show of his art this month at the Toledo School for the Arts Porter Gallery, and is hosting a Veterans Matter fundraiser this Wednesday the 19th at the gallery from 6 – 9 p.m. John has donated a pair of tickets and meet and greets for the silent auction at the event. For information and tickets visit this link right here. See you there!

In an interview I told the press that “John has made it a lifelong mission to use his celebrity not just to draw attention, but to provide his time, capacity and resources to many organizations which care for others, such as Farm Aid.”

And I think that is the difference. He could have just written a check and moved on. But instead he invests some of his heart for those on the streets.

And that heart generates so much more.

One example is in part because of John’s long-term engagement with us. Jordan Reses Supply Co. out of Ann Arbor just made a national commitment of $300,000 for housing veterans and funding the start-up of our new Training and Re-Employment Program (TREP) to hire and train formerly homeless veterans who otherwise might not get  the chance.

And that heart brings with it some pretty incredible people. His manager Randy Hoffman, publicist Claire Mercuri, and social media guru Tony Buechler have all played a key role in helping to make this event in Toledo happen. We thank you!

For me personally, John Mellencamp is one of the three men I admire most. A man who by example used his celebrity to bring people together to do good. Who inspired me 26 years ago to use my celebrity as a comedian — to bring the community together to help those on the streets. Who, in 2007, made a short visit that turned into thousands being helped.

This Friday, prior to the public events in Toledo, John will again meet privately at Tent City with some of the people housed or employed by the very programs that were created because he cared. Why?

Because John has proven with his life and his heart: Everyone truly does matter!